When people think about martial arts, we are certain that they think about Asian people fighting each other. When you watch martial arts movies, it does seem pretty obvious that Asia has a stranglehold on the market, mostly with disciplines such as aikido, ninjutsu, karate, kung fu, and taekwondo. Some might also think about bare-knuckle boxing and krav maga in Europe, or Brazilian jiu-jitsu in South America. However, not many people will think about Africa when thinking about martial arts. Here I will discuss some awesome African martial arts that people often overlook. 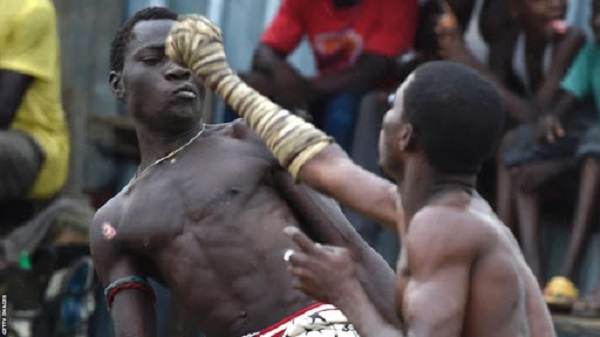 Dambe was created by the Nigerian Hausa people and it has become one of the more popular forms of fighting in North Africa. It is a brutal style of martial arts and each fight takes place in a sandpit. Before a fight starts, fighters have a “magic” herb mixed into any incisions as this is believed to increase their strength. Rope cords are then wrapped around their dominant hand and the two fighters then step into the ring and trade blows to any part of their opponent’s body that they manage. Fighters are allowed to use their arms, legs, and heads to inflict damage. The Nigeria Traditional Boxing League Association is trying to increase the popularity of this sport and make it global.

This is a form of wrestling that originates from Senegal in West Africa. This sport first started out as a hobby for fishermen and farmers that were exchanging goods. However, it has since evolved, and it is not a much-anticipated event that even has sponsorships. Before a fight, the ring is sprinkled with a powder that they believe wards of black magic and the fighters take a bath in a liquid that they believe repels negative energy. There are timed sessions and the fighters punch and grapple each other until there is a winner. The loser of the fight has to present the winner with a gift as a show of good sportsmanship.

This African form of fighting is exclusive to a tribe that originates from South Africa’s Bantu people. It has been used in battle, ceremonies (such as weddings), self-defense, and recreation. When it is used for recreation, the fighters set the tone for good sportsmanship by tapping their opponent’s shield before the fight starts and not aiming for the head when the sparring begins. However, when this is used in battle, all restrictions are off and everything goes.

Other Types of Fighting Styles

There are plenty of other African martial arts that are practiced throughout the continent. Below I will talk briefly about some that are worth talking about.

Tahtib: This comes from Egypt and it is another type of stick-fighting that was traditionally used by soldiers that were cross-training in archery and wrestling.

Istunka: This is another fighting style that uses sticks and it originated in Somalia. It was was once very popular due to its use of lethal weapons and armour.

Sudanese wrestling: There are no prizes for guessing the African country where this originated from. It is also known as Nuba wrestling and it takes place when farming festivals are in full swing. The matches are usually a community event that is passed down by previous champions.

Musangwe: This is a brutal and ruthless type of fighting that is popular in a lot of countries across Africa. The aim of this sport is to be the fighter that draws first blood as the fight is over whenever blood has been spilled. There are no gloves involved and the fighters can use any means to draw blood or to get their opponent to surrender. 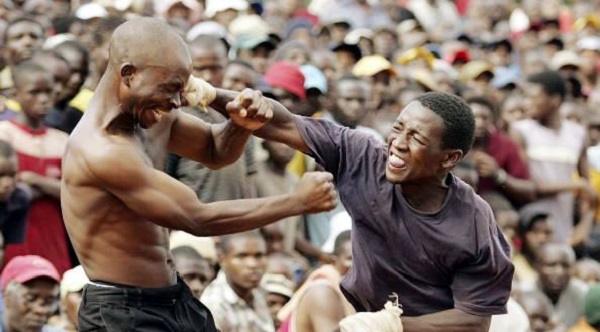 While the majority of martial arts can be traced back to ancient times, many have evolved in such a way to fit the popular demands of today’s modern world. Dambe as well as other forms of African martial arts may not be as popular as martial arts from Asia, but the techniques and styles that you practice while fighting can help you to become a better all-rounded martial artist. Even today’s popular martial arts such as Muay Thai and karate were unknown as one point in their history. So, maybe in a decade or two you will be able to practice some Dambe or Laamb at the martial arts school near you.